The FilmCraft book series focuses on specific disciplines within the filmmaking profession using interviews from noteworthy professionals in the field. This volume by Geoffrey Macnab and Sharon Swart features interviews with fifteen producers, and profiles of five other producers.

The producers interviewed in this volume are:

The producers profiled are:

There may be a number of people that question the choice of producers interviewed in this volume, but it would be nearly impossible to include every relevant producer currently working in this field. The producers chosen come from very diverse backgrounds, making the individual interviews unique and valuable. Any reservations that one has are likely to fade once they start reading the book.

There is a wealth of conflicting information related to the readers. This book differs slightly from other books in the series due to the business end of filmmaking. The “producer” is one of the most misunderstood positions in the film industry. Different producers have a different level of creative control. Some might function differently than others. This makes this volume all the more valuable.

The featured producers talk passionately about their craft, and engage the reader immediately. The text is illustrated with wonderful photos from films that make the book a visual treat. I would even say that FilmCraft: Producing is truly addictive! It will be a treasured addition to the libraries of anyone who loves the cinema, and a wonderful resource of inspiration to future filmmakers. 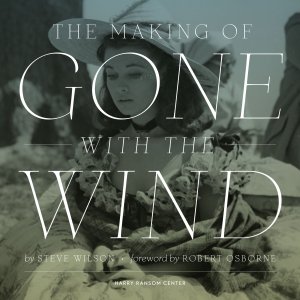 Cinemaphiles have grown to expect certain things from “making of” texts. They expect the book to be a comprehensive account of a film’s production. They also expect a few photos to be found hidden throughout the text of the book. This is really all that is required of such a book. It is a rare event when a book exceeds these basic requirements. Steve Wilson’s “The Making of ‘Gone with the Wind’” is such a book.

Gone With The Wind is one of the most popular movies of all time. To commemorate its seventy-fifth anniversary in 2014, “The Making of ‘Gone With The Wind’” presents more than 600 items from the archives of David O. Selznick (the film’s producer) and his business partner, John Hay “Jock” Whitney. These items are housed at the Harry Ransom Center at The University of Texas at Austin. Steve Wilson is the curator of the film collection at the Harry Ransom Center. These rarely seen materials (which are also being featured in a major 2014 exhibition at the Ransom Center) offer fans and film historians alike a must-have behind-the-camera view of the production of this classic.

Before a single frame of film was shot, Gone With The Wind was embroiled in controversy. There were serious concerns about how the film would depict race and violence in the Old South during the Civil War and Reconstruction. While Clark Gable was almost everyone’s choice to play Rhett Butler, there was no clear favorite for Scarlett O’Hara. And then there was the huge challenge of turning Margaret Mitchell’s Pulitzer Prize–winning epic into a manageable screenplay and producing it at a reasonable cost. “The Making of ‘Gone with the Wind’” tells these and other surprising stories with fascinating items from the Selznick archive, including on-set photographs, storyboards, correspondence and fan mail, production records, audition footage, gowns worn by Vivien Leigh as Scarlett, and Selznick’s own notoriously detailed memos.

This reviewer has never come across a more perfect book about the creation of a film. Wilson’s book goes beyond an incredibly comprehensive text and manages to be visually spectacular. Many people would call it a “coffee table book,” but these books rarely provides the reader with such a wealth of information.

This book is essential for fans of Gone with the Wind and film historians alike. It sets a new standard for books of its kind. One can only hope that other publications rise to these standards.