Storytelling for Film and Television has been described as “a theory and practice book which offers a definitive introduction to the art of storytelling through writing, directing, and editing.” This is a fair enough description of Ken Dancyger’s text, although it is debatable as to whether it really “provides a comprehensive explanation of the tools that underpin successful narrative filmmaking and television production.” In fact, it seems very unlikely that a truly “comprehensive” examination of this particular subject will ever exist.

Dancyger attempts to explain how the three aforementioned phases of film and television production contribute to the storytelling process. He does this by using several very specific examples from films such as The Verdict, The Revenant, and Son of Saul and television series such as Breaking Bad and Game of Thrones. This approach is both the book’s greatest strength and its major weakness since one’s enjoyment and understanding will depend on whether they have seen the movies that are being used as case studies and that they enjoy (or at least appreciate) them.

Jeff Foster’s textbook on green screen production methods is intended to be a comprehensive educational resource for beginners. While it covers every aspect of the green screen process (the screen itself, lighting, compositing, etc.), it is quite vague and not terribly in-depth despite the wealth of photographs that provide visual examples to clarify the text. It makes for a reasonably solid introduction for filmmakers, but anyone looking for detailed instruction will have to find it elsewhere. 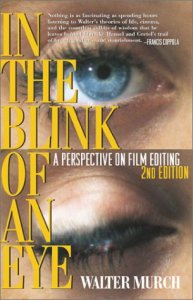 “Many of the thoughts that follow… are therefore more truly cautionary notes to myself; working methods I have developed for coping with my particular volcanoes and glaciers. As such, they are insights into one person’s search for balance, and are perhaps to others more for the glimpses of the search itself than for specific methods that search has produced.” –Walter Murch (Preface)

In the Blink of an Eye – 2nd Edition can be separated into two distinct halves. The first covers a very broad range of territory, and is essentially a transcript of a lecture given by Walter Murch at Spectrum Films in Sidney, Australia in October of 1988. The second half focuses on Digital editing (as it stood in 2001).

Both sections are less about the nuts and bolts of editing, and more of a lucid discussion about editing in theory. Why do cuts work? How does one go about editing a film properly? Walter Murch is an established authority on this topic, and one wished that some of the editors currently working would read the book. Their work might exponentially improve. It is obvious that Murch has given film editing a great deal of thought, and his experience and wisdom would benefit anyone wishing to edit features.

There have been countless books devoted to Alfred Hitchcock. Most are film theory, many are biographies, and others are detailed accounts of the making of a specific Hitchcock film. Nearly every theoretic angle has been covered in meticulous detail. However, Tony Lee Moral had something very different in mind for “Alfred Hitchcock’s Moviemaking Master Class.” This book is not intended for scholars. It does not delve into theory, biography, or detail any film’s creation. Moral prefers to offer future filmmakers a text for using the films of Alfred Hitchcock as a tool for learning the filmmaking process. It is really a superb idea. Could there be a better tool for teaching young filmmakers the craft of filmmaking? It is certainly difficult to think of one. The book covers the entire filmmaking process (writing, planning, shooting, editing, and marketing) using easy to…