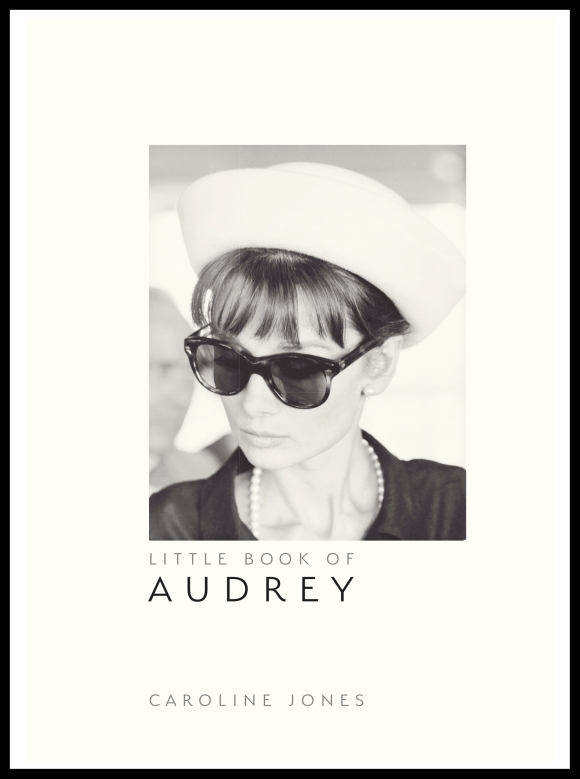 A Conversation with Caroline Jones

“Little Book of Audrey Hepburn” might be best described as a coffee table book in miniature. It would make a great end table book as it is perfect for casual browsing as it has plenty of attractive photos of the legend that is Audrey Hepburn. The text zeroes in on the iconic style of the actress and is a tribute to her timeless appeal.

Caroline Jones graciously agreed to sit down for an exclusive discussion about her book and Audrey Hepburn’s immortal appeal.

CL: Could you describe “The Little Book of Audrey Hepburn” for our readers? When and how did the idea for the book arise?

CJ: It’s really a style biography that takes you through the evolution of her unique look—from her early days as a ballet dancer to her iconic film roles. Although there have been many books on Audrey, I felt that no one had written about the way her life experiences and events had influenced her sartorial style in a chronological way.

CL: Were there any challenges in making it a reality?

CJ: Finding and getting permission to use some of the rarer pictures was sometimes a challenge.

CL: There are so many beautiful pictures of Hepburn throughout the pages of your book, but there were also thousands of photos available. How did you choose which photos should be included?

CJ: It was hard, as there are so many! But I tried to pick the ones that best told her style evolution—from chorus girl to leading lady.

CL: How did you first become interested in Audrey Hepburn?

CJ: When I watched Breakfast at Tiffany’s for the first time at age 13. I was transfixed. She was the most stylish women I’d ever seen and I immediately wanted to be like her.

CL: What made her different from other legendary actresses of the era, and why do you feel that it is so timeless?

CJ: Today the Audrey ‘look’ is so sewn into the fabric of our consciousness that it’s easy to forget how revolutionary it was when she starred in 1953’s Roman Holiday. Audrey arrived with her elfin features, willowy frame, and preppy clothes at a time when being a star meant having exaggerated womanly curves—the sort of shapely figure belonging to the pin-ups Marilyn Monroe and Jane Russell. Audrey’s signature look was boyish yet feminine, independent yet sexy, and modern yet somehow timeless. As a result it still looks fresh today.

To quote Billy Wilder (who directed the breakout star in Sabrina): “After so many drive-in waitresses becoming movie stars, there has been this real drought, when along comes class. She may be a wispy, thin little thing, but when you see that girl, you know you’re really in the presence of something. It’s a rare quality, but boy do you know when you’ve found it.”

CL: The book discusses Hepburn’s legendary association with Hubert de Givenchy. What was it about his designs that made this such a fruitful collaboration?

CJ: Givenchy instinctively understood Audrey’s body shape and what suited her willowy frame—the measurements of which he often stated stayed the same throughout her life: 32-20-35. Givenchy’s structured gowns and coats perfectly showed off these tiny proportions, directing your eyes to her narrow waist and slim upper torso. But it was a symbiotic relationship, and he understood the unique quality she could add to his designs while elevating the good to the fabulous. Givenchy described this thus: “She gave a life to the clothes—she had a way of installing herself in them that I have seen in no one else since… Something magic happened. Suddenly she felt good. You could feel her excitement, her joy.”

CL: Which of her films best captures her fashion sensibilities?

CJ: Breakfast at Tiffanys, My Fair Lady, and Charade are my three favorite movies when it comes to the outfits. Each is very different in feel and style, but all demonstrate a key phase of her fashion life—and her ability to evolve.

CL: Are these films your favorites or do you prefer one of the others? Which film stands as your personal favorite, and why does this film win out over the others?

CJ: Sabrina is actually my favorite, as it was one of the first times I saw her wear ballet flat with capri pants. Such a classic look that people still want to copy now.

CL: I subscribe to a number of fashion magazines, and it is difficult to distinguish one cover from the next. The photography simply doesn’t seem nearly as iconic as those which graced the pages of periodicals in Hepburn’s heyday. It seems to me that a truly iconic cover is extremely rare. What do you think changed? Why are images of the stars of yesteryear more expressive and memorable than those today?

CJ: Fashion was a slower and more thoughtful process in those days. Dresses and outfits were more carefully planned and created. Things move so quickly in today’s ‘fast fashion’ society. Fabrics are cheap, throw away, and not intended to last as long as they were back then. Although Audrey’s style evolved, it didn’t change fundamentally. She had her own unique look that didn’t take into account the current fashions of the day. That’s what made her an icon.

As her son Sean Hepburn Ferrer said: “If there was timelessness, it was because she believed in quality. And if she is still an icon of style today, it’s because once she found her look, she stayed with it throughout her life.”